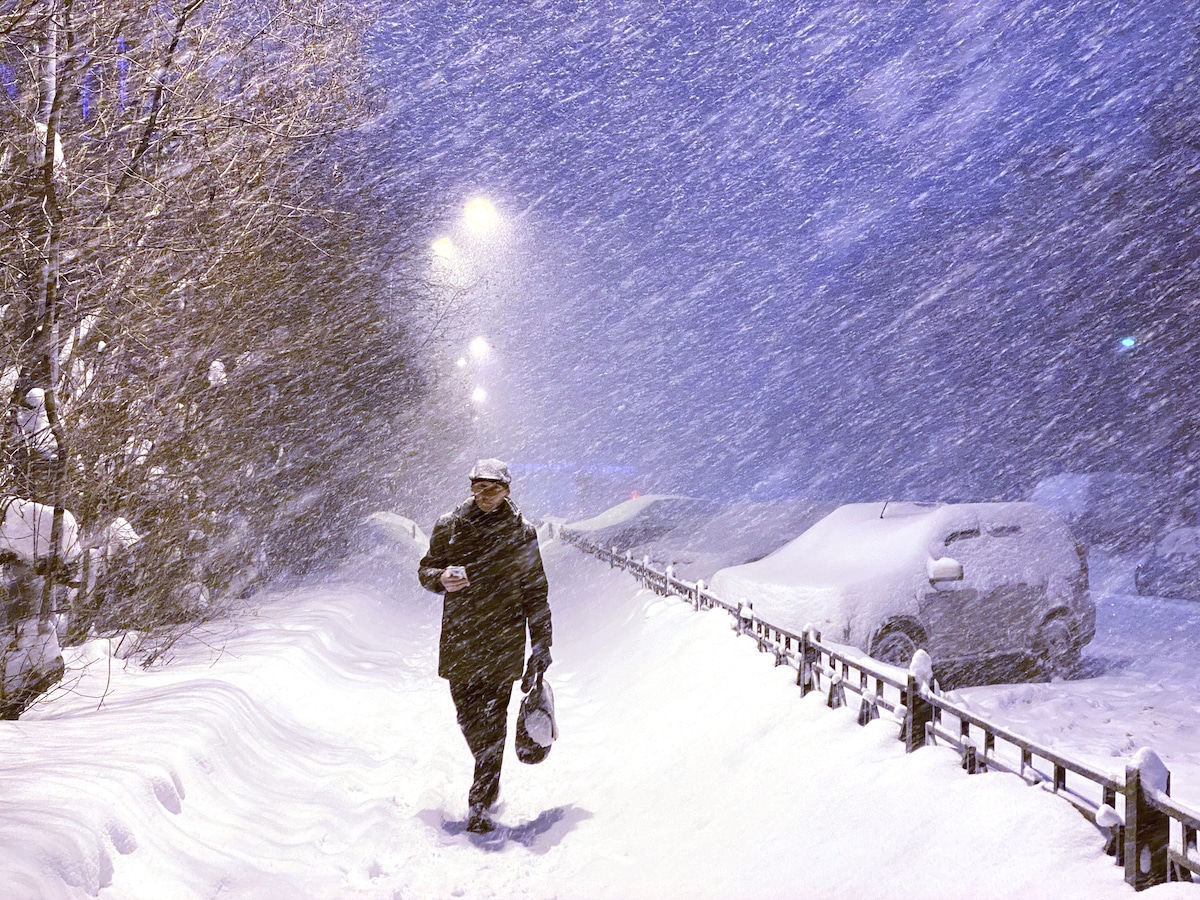 “A man walks through a blizzard in central Murmansk at 2:49 p.m.” (Photo: Amos Chapple/RFE/RL)

Armed with his iPhone 11, photojournalist Amos Chapple plunged into the darkness of the Arctic Circle. Chapple spent 40 nights in Murmansk, Russia, which sees 24 hours of darkness every year from December 2 until January 11. Using the iPhone’s night mode, Chapple set about documenting his time in this strange urban environment and telling the story of the people who live in the Arctic Circle’s biggest city.

Murmansk was founded in 1916, when Tsar Nicholas II was looking to create an ice-free port to ship supplies to Russian allies. After the revolution, Murmansk grew in importance and had an important role in sending supplies during WWII. The city continued to grow and reached its peak just prior to the end of the Soviet Union. At that time, a nearby naval base sent the population soaring to nearly half a million, though these days just under 300,000 people call it home.

It was in this surreal setting, filled with the remnants of decadent Soviet architecture, that Chapple decided to test out his new iPhone 11 and see how it would perform. The results did not disappoint. “The iPhone’s Night Mode is the witchiest camera technology I’ve ever used. I still don’t understand it,” he writes. “I was shooting three-second exposures made handheld, yet I never saw any movement blur. All of the shots I made were tack sharp.”

Without bulky camera equipment, he was able to remain inconspicuous and therefore get a more intimate view of life up north. Of course, the camera isn’t without its shortcomings. Ghosting is a problem, with trademark green spots often showing up in the frame—though Chapple points out that these could probably be fixed in post-production. And though the camera is powerful, editing possibilities after the fact are more limited than if one was shooting in RAW on a DSLR. This means that, as a photographer, one needs to be aware that there’s not much wiggle room once the shot is taken.

With these issues in mind, Chapple is still convinced that iPhone photography opens up new possibilities. Though he won’t be switching over permanently, his experience shooting in Murmansk showed him the freedom and flexibility of working solely with his phone.

You can learn even more about Chapple’s time in the Arctic Circle on RFL/RE. 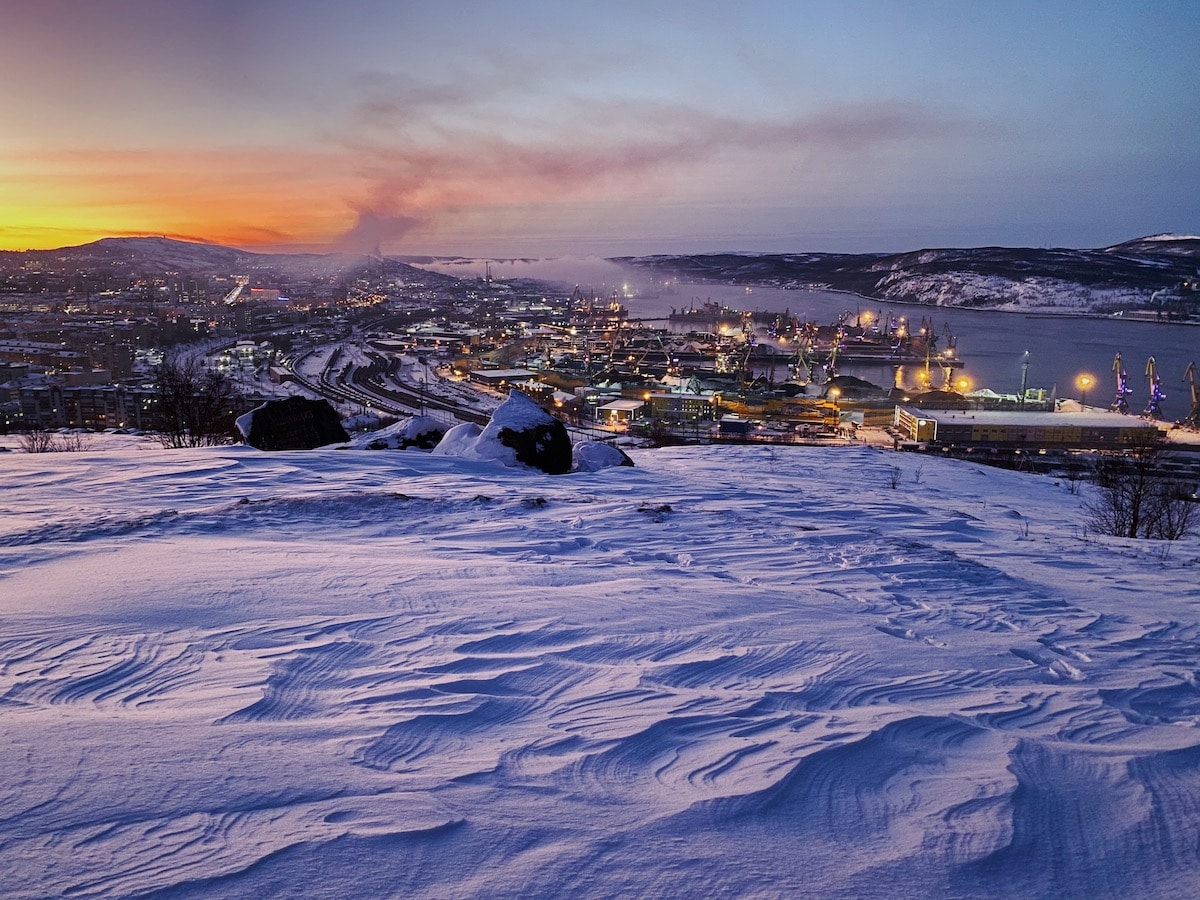 “This is Murmansk, the largest city in the Arctic Circle. The picture was taken on December 11 at 11:32 a.m. as the sun neared its highest point just below the horizon.” (Photo: Amos Chapple/RFE/RL) 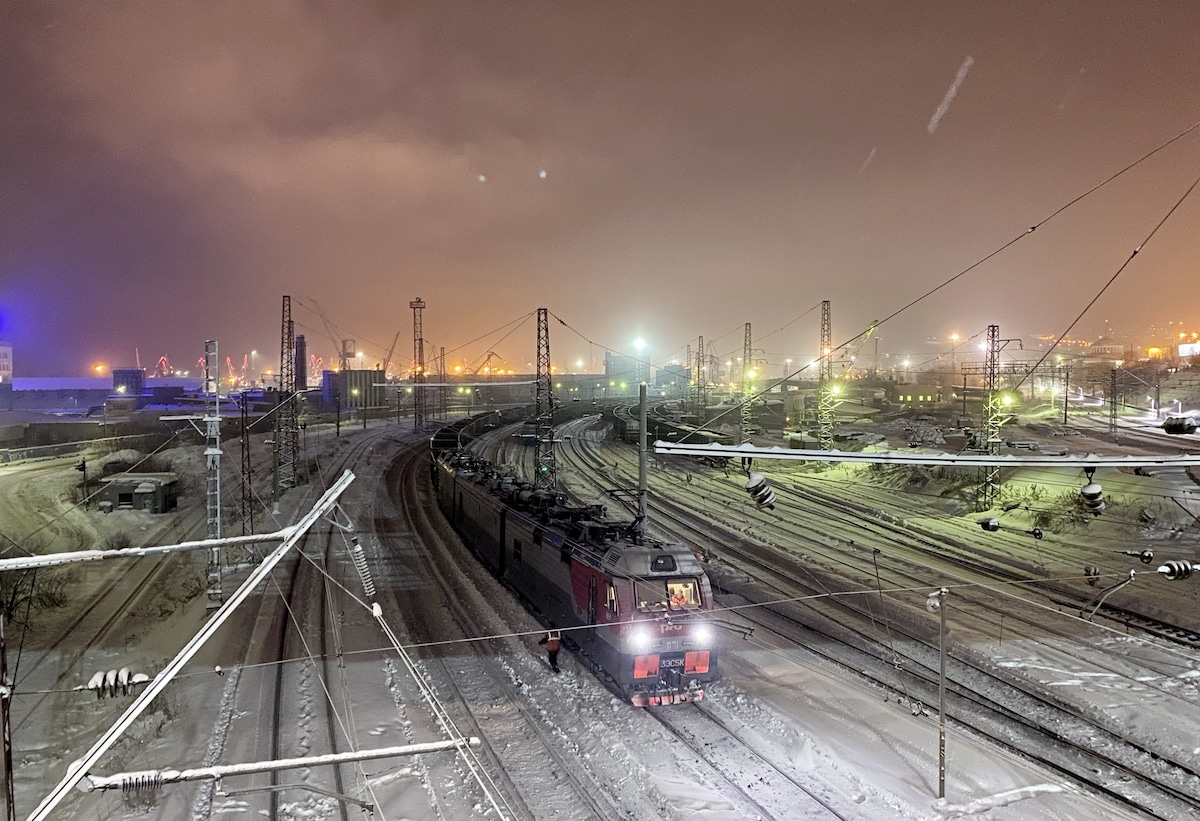 “The Murmansk rail yard runs nonstop, mainly transporting coal. The rail freight industry is one of the few major employers left in the city after the fishing industry was decimated due to Western economic sanctions and tangled Russian customs rules.” (Photo: Amos Chapple/RFE/RL) 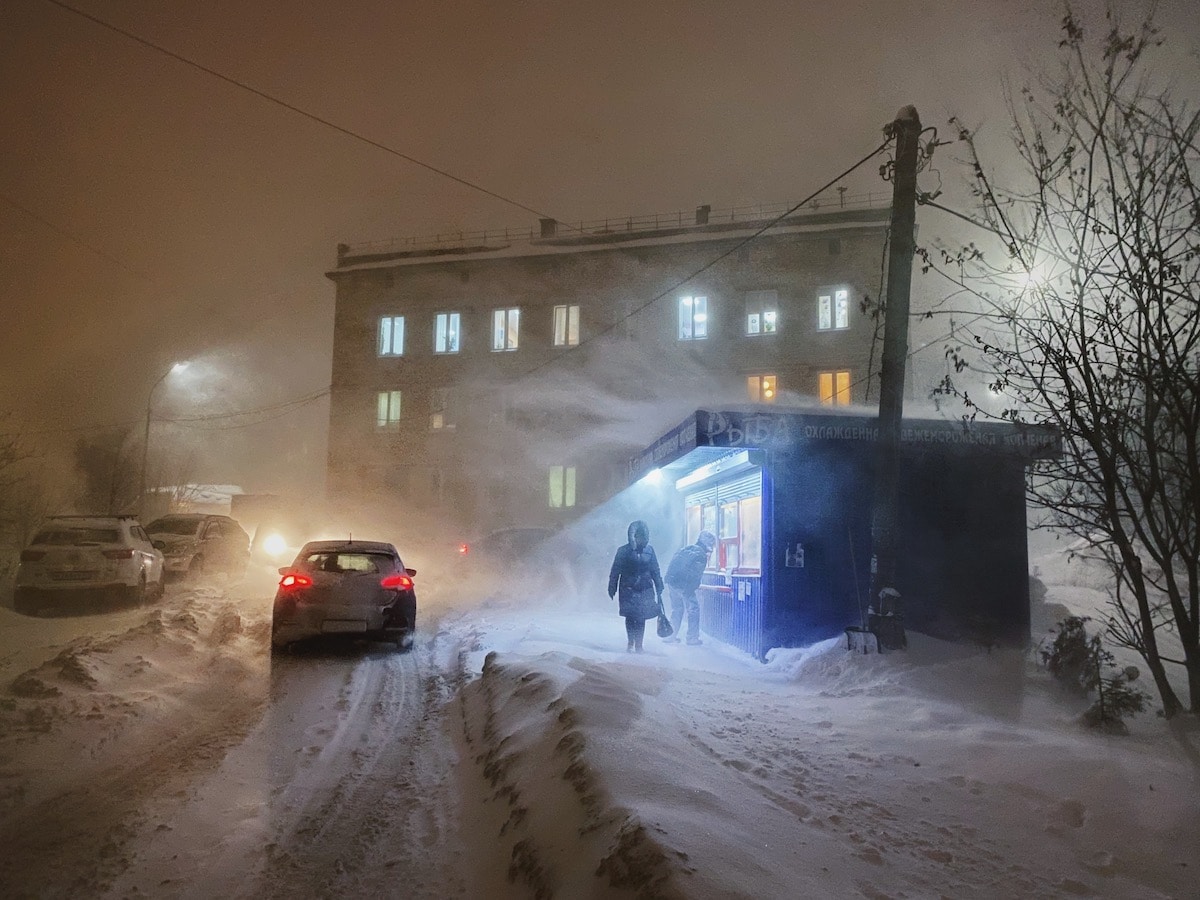 “A customer peers into a fish stall as a storm blasts through Murmansk at 3:25 p.m.” (Photo: Amos Chapple/RFE/RL) 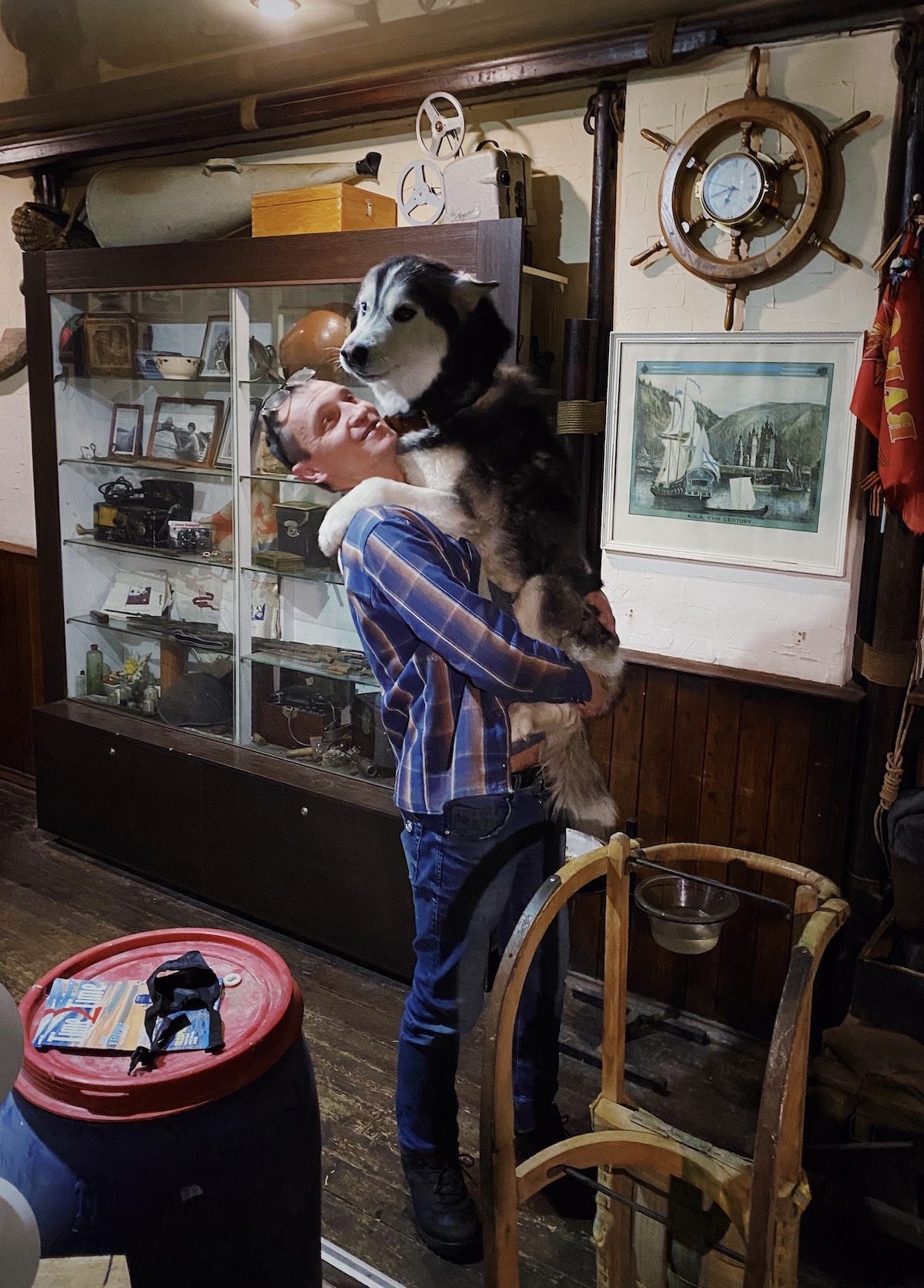 “Ex-sailor Konstantin holds his favorite husky. The 52-year old says he loves Murmansk for the fishing and freedom the surrounding wilderness offers but that after living his whole life in the city he’s ‘a bit tired’ of the winter dark.” (Photo: Amos Chapple/RFE/RL) 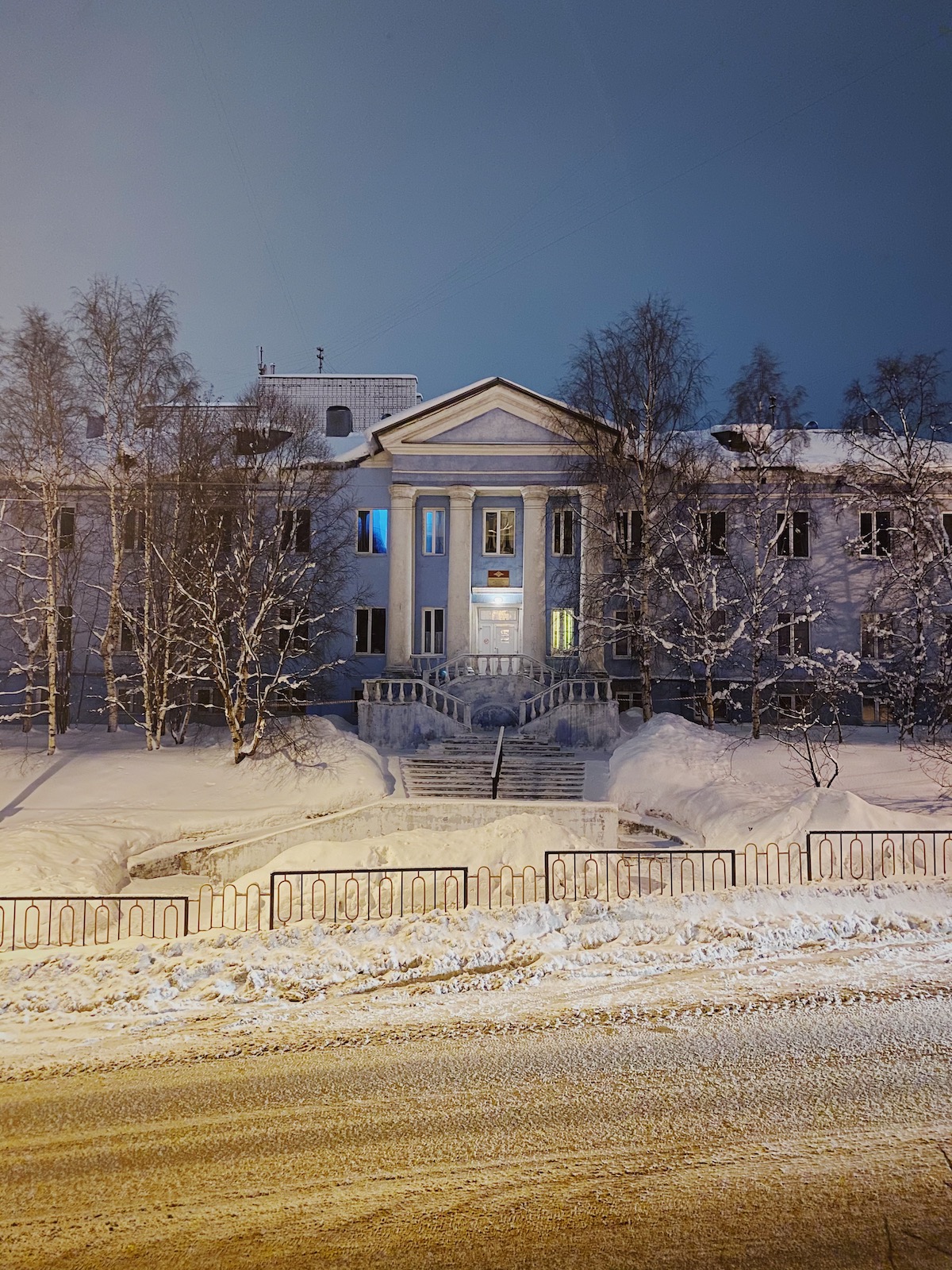 “A Stalinist-era building stands in central Murmansk. Most buildings in the city date from the Soviet period.” (Photo: Amos Chapple/RFE/RL) 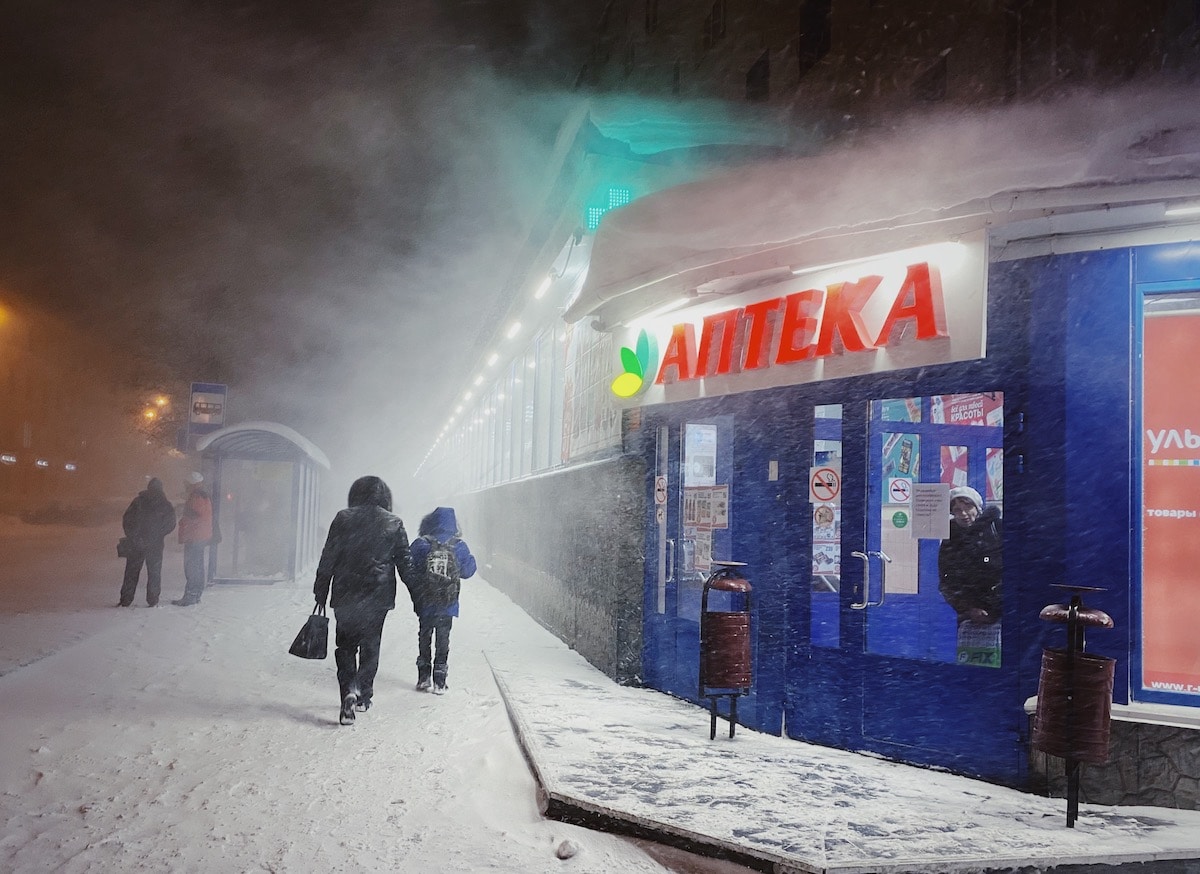 “A woman waits for her bus in the warmth of a pharmacy at 2 p.m.” (Photo: Amos Chapple/RFE/RL) 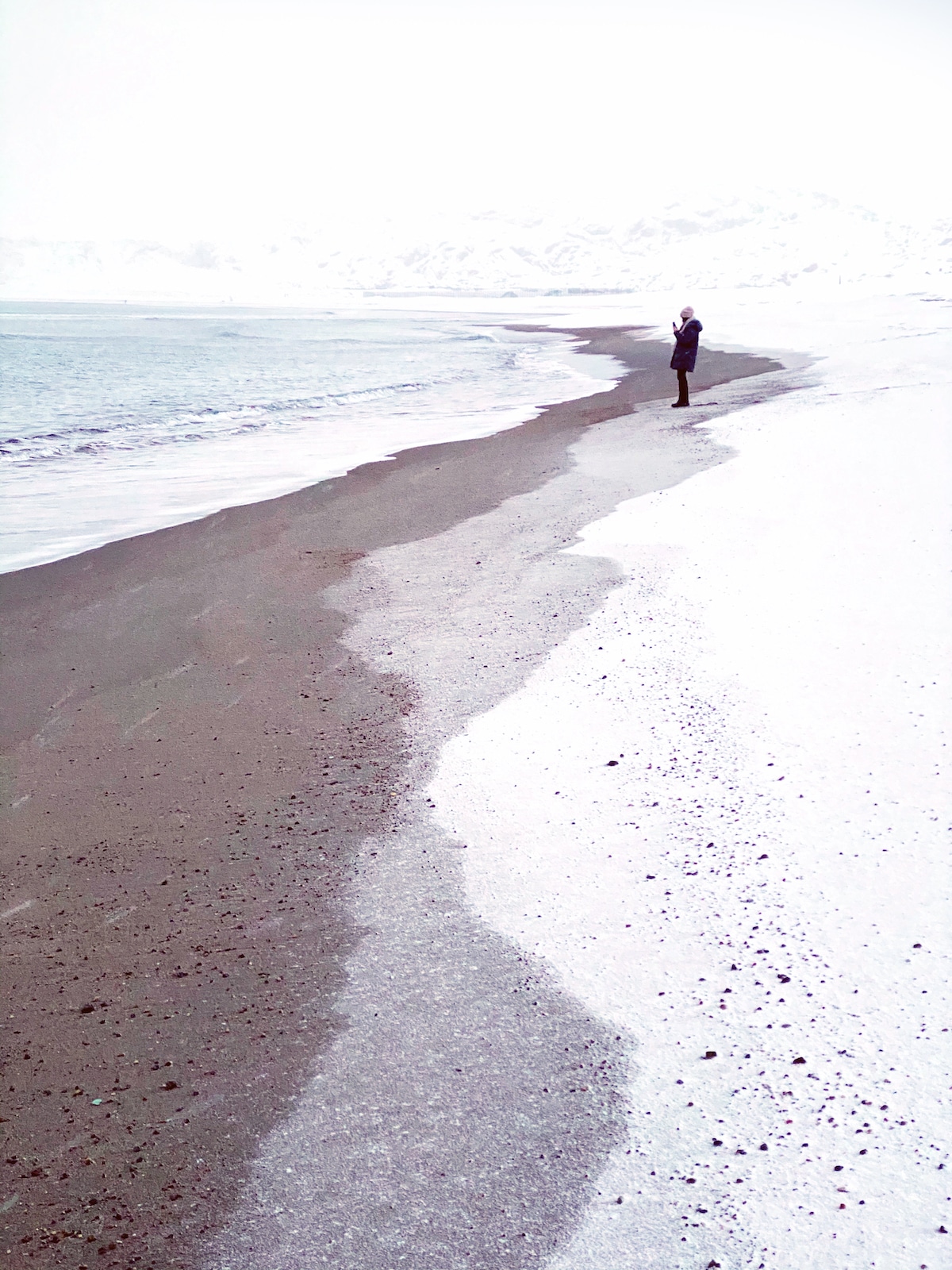 “A Chinese woman on the shore of the Barents Sea at midday. Since 2014, when Russia’s ruble plunged in value, local tour guide Mihail Tochilov says Chinese tourism to the Murmansk Oblast has spiked dramatically.” (Photo: Amos Chapple/RFE/RL) 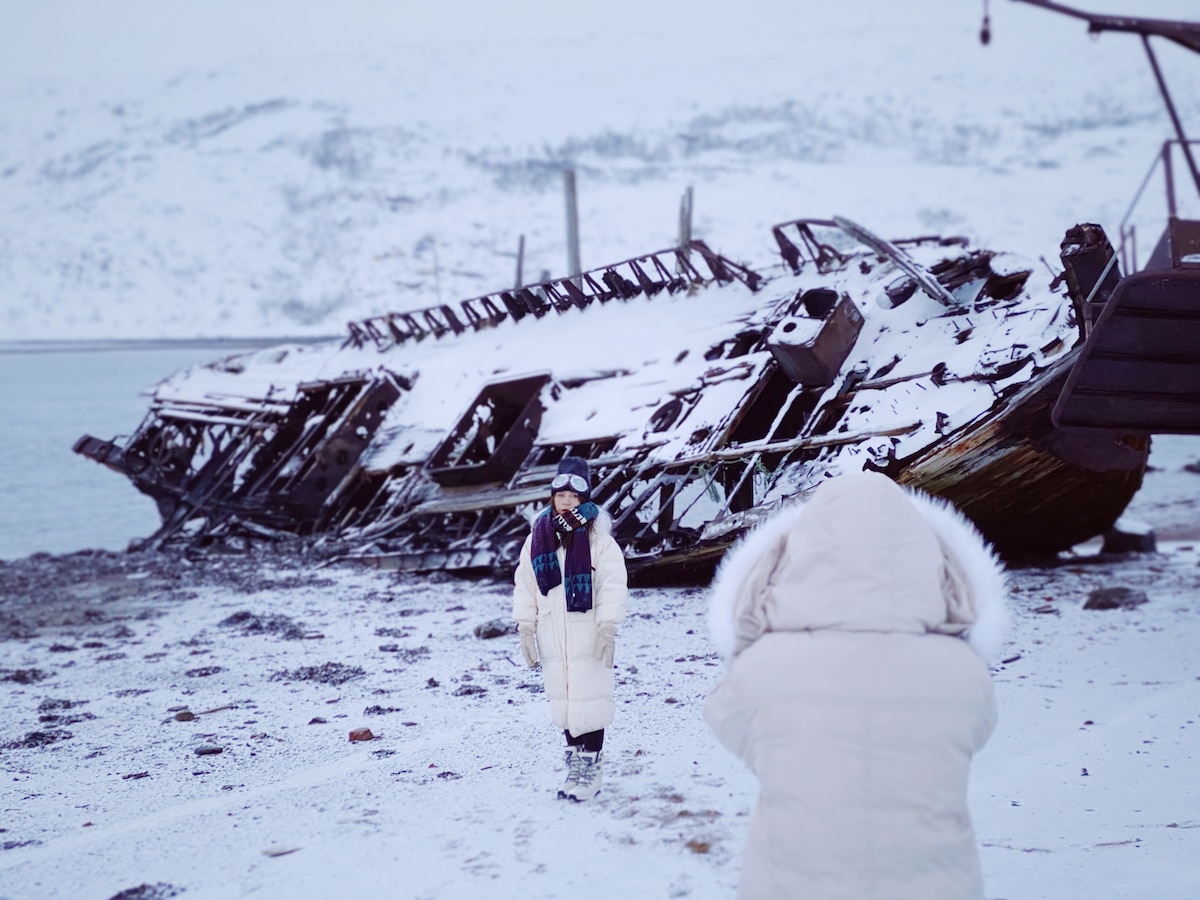 “Friends from Guangdong, China, pose in front of a tsarist-era boat in Teriberka at 11:34 a.m. When asked why she had chosen Russia’s Arctic over nearby Norway or Finland, she replied immediately, ‘Cheap!’ She then hooked her fingers together to say ‘and the two countries [Russia and China] are good friends.’” (Photo: Amos Chapple/RFE/RL) 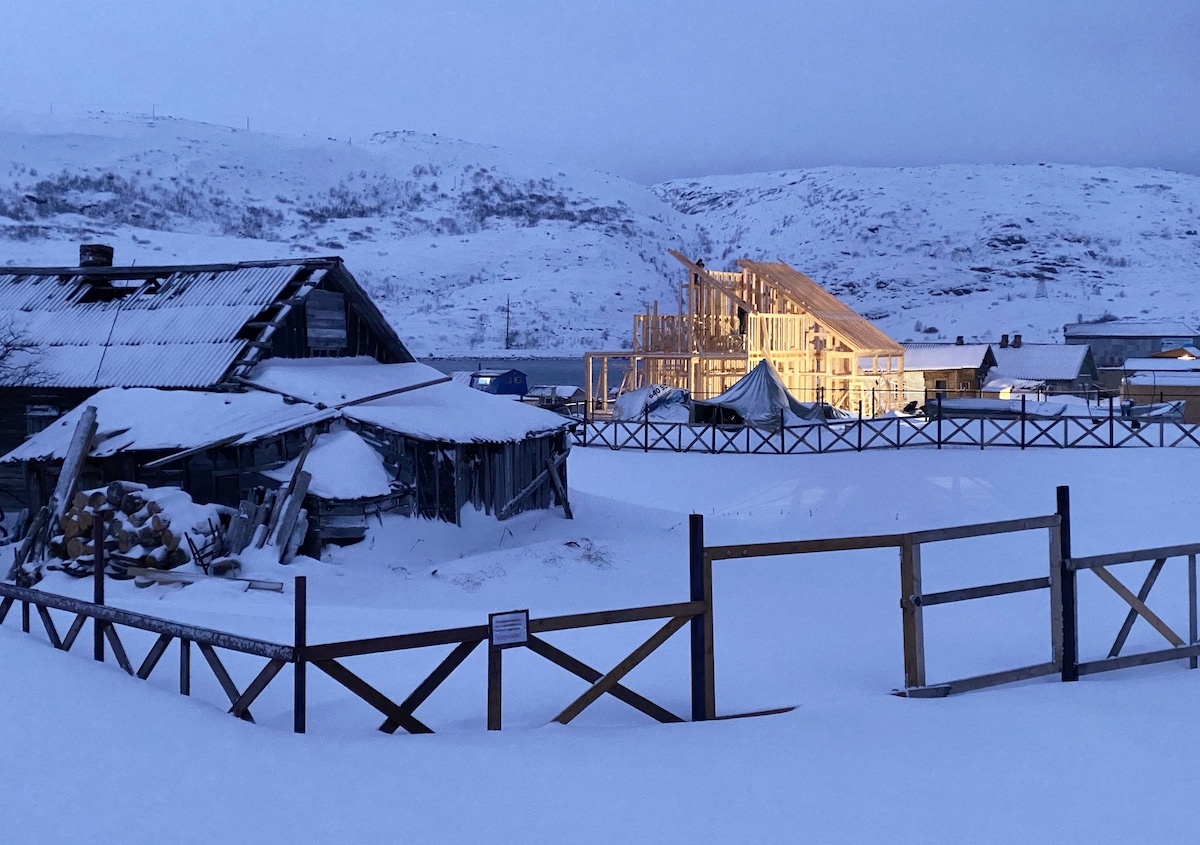 “A hotel under construction at 2:40 p.m. under spotlights that allow the builders to complete a normal workday. In 2018, 64,000 foreign tourists — most of them from China — visited Murmansk to glimpse the northern lights. That’s up from just some 200 Chinese tourists in 2013.” (Photo: Amos Chapple/RFE/RL) 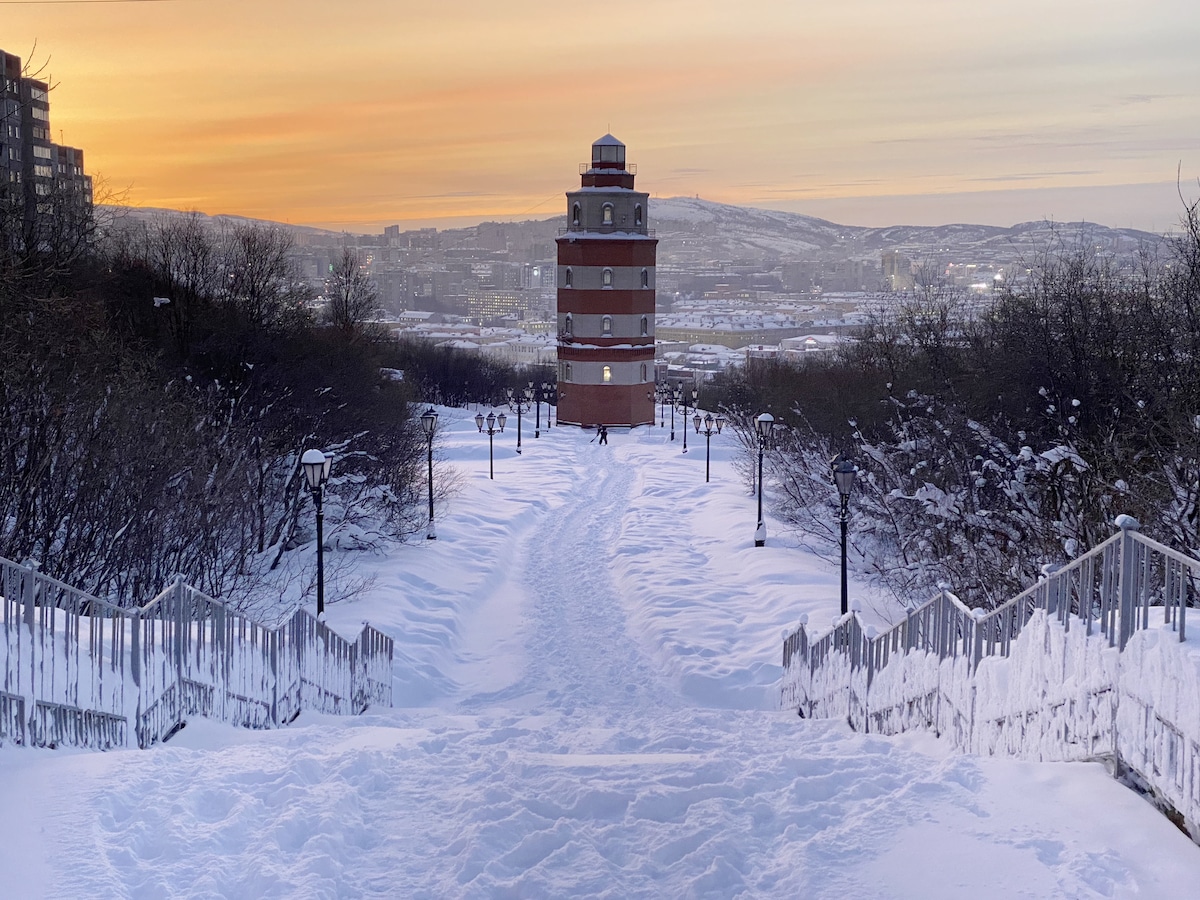 “A memorial to the sailors who died in peacetime. It was photographed at midday.” (Photo: Amos Chapple/RFE/RL) 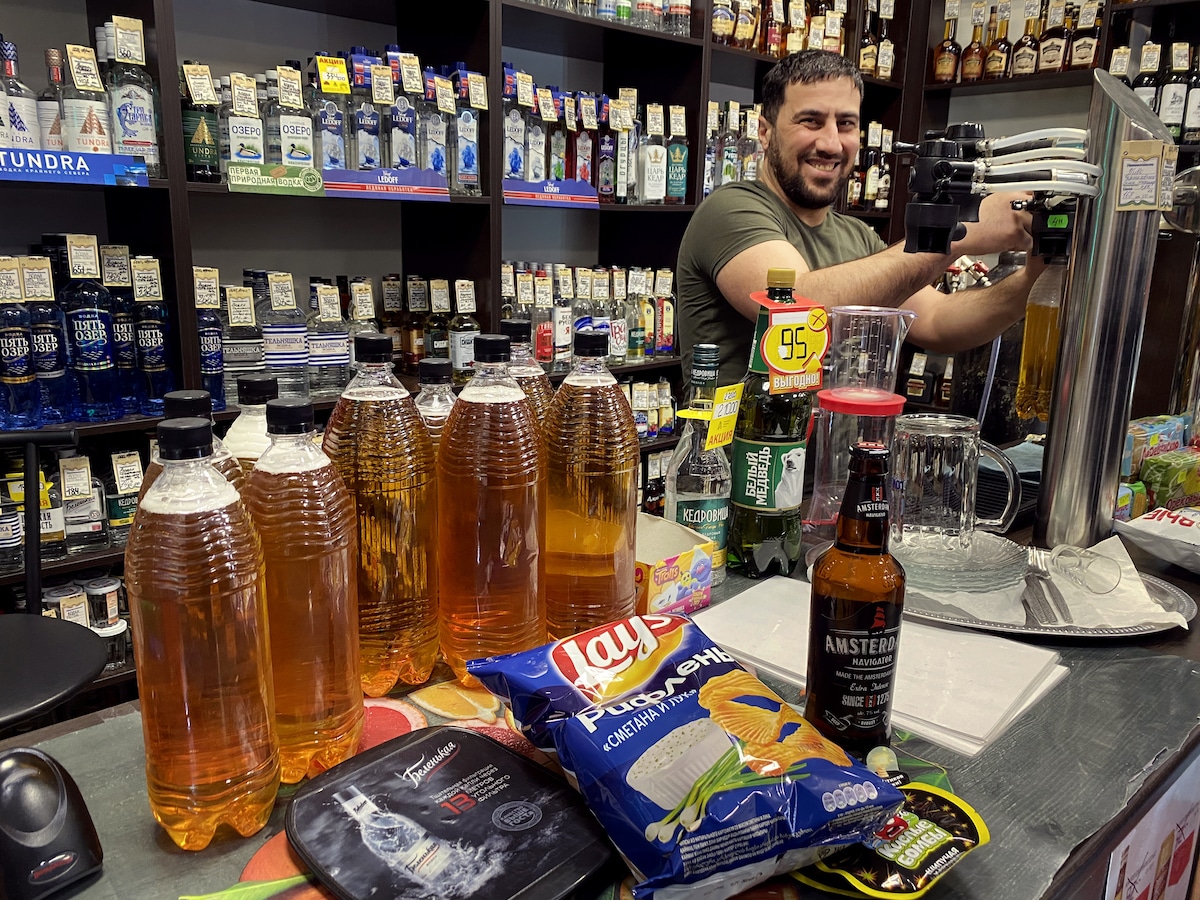 “A shopkeeper pours for a man who said the 10 liters of beer were for ‘my wife and me over the weekend.’” (Photo: Amos Chapple/RFE/RL) 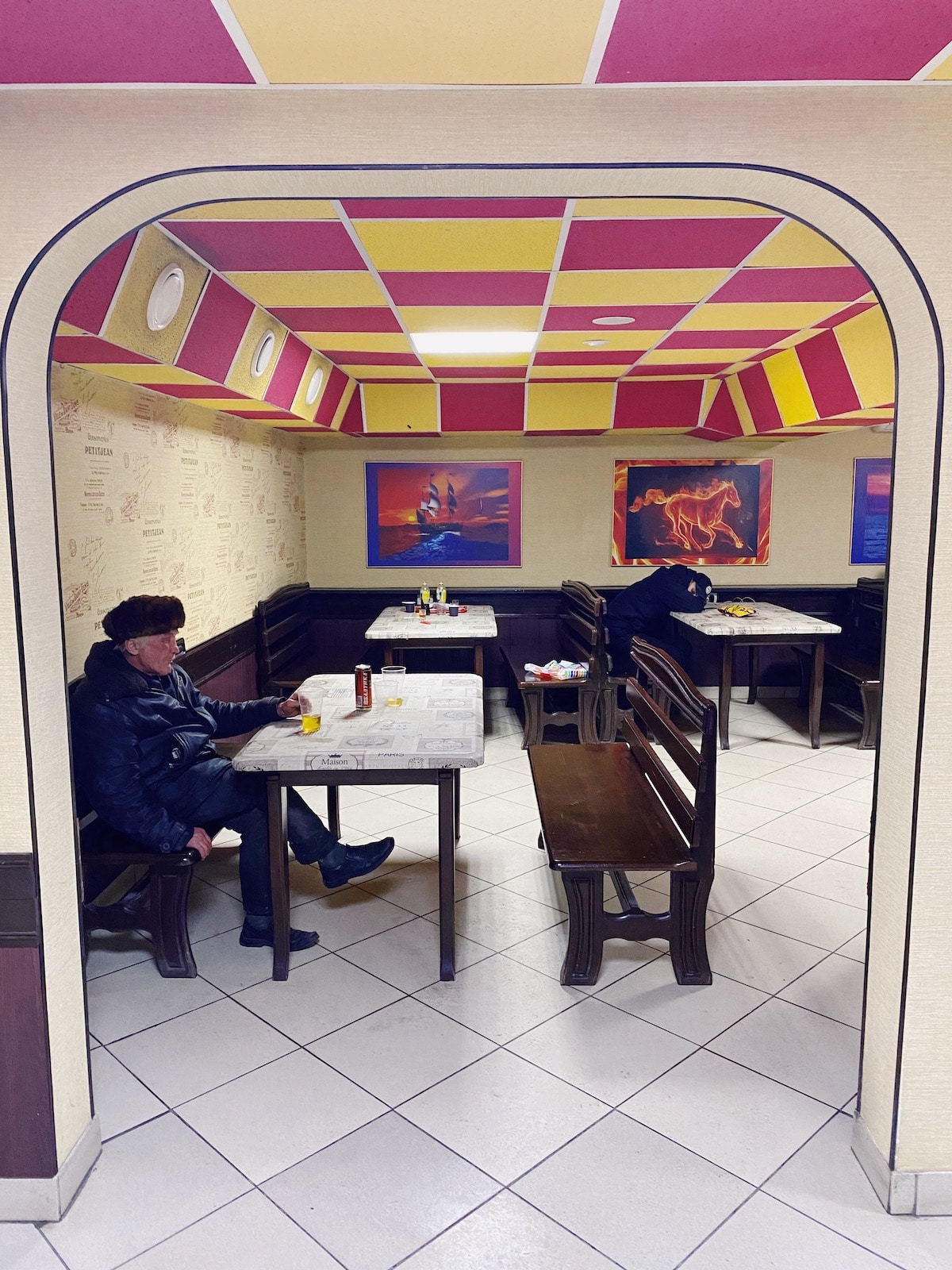 “Men drinking underground in a basement bar where a large glass of beer costs around $1.” (Photo: Amos Chapple/RFE/RL) 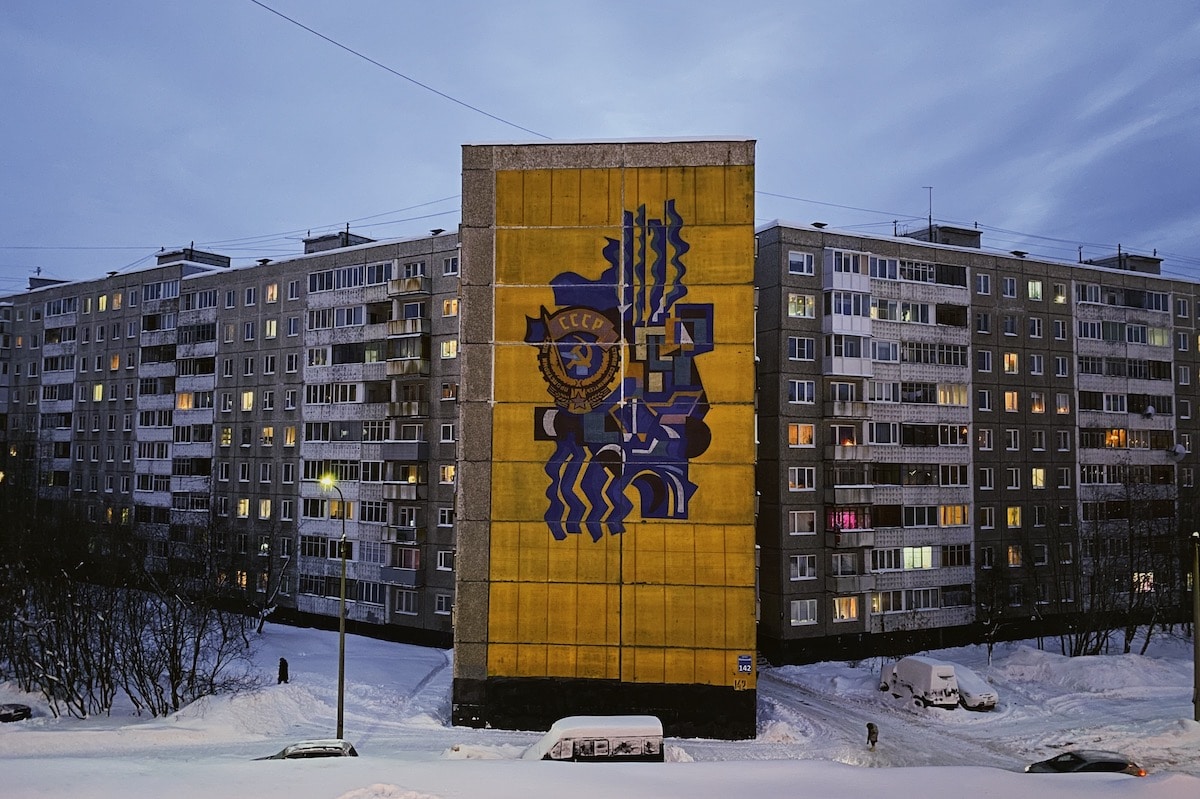 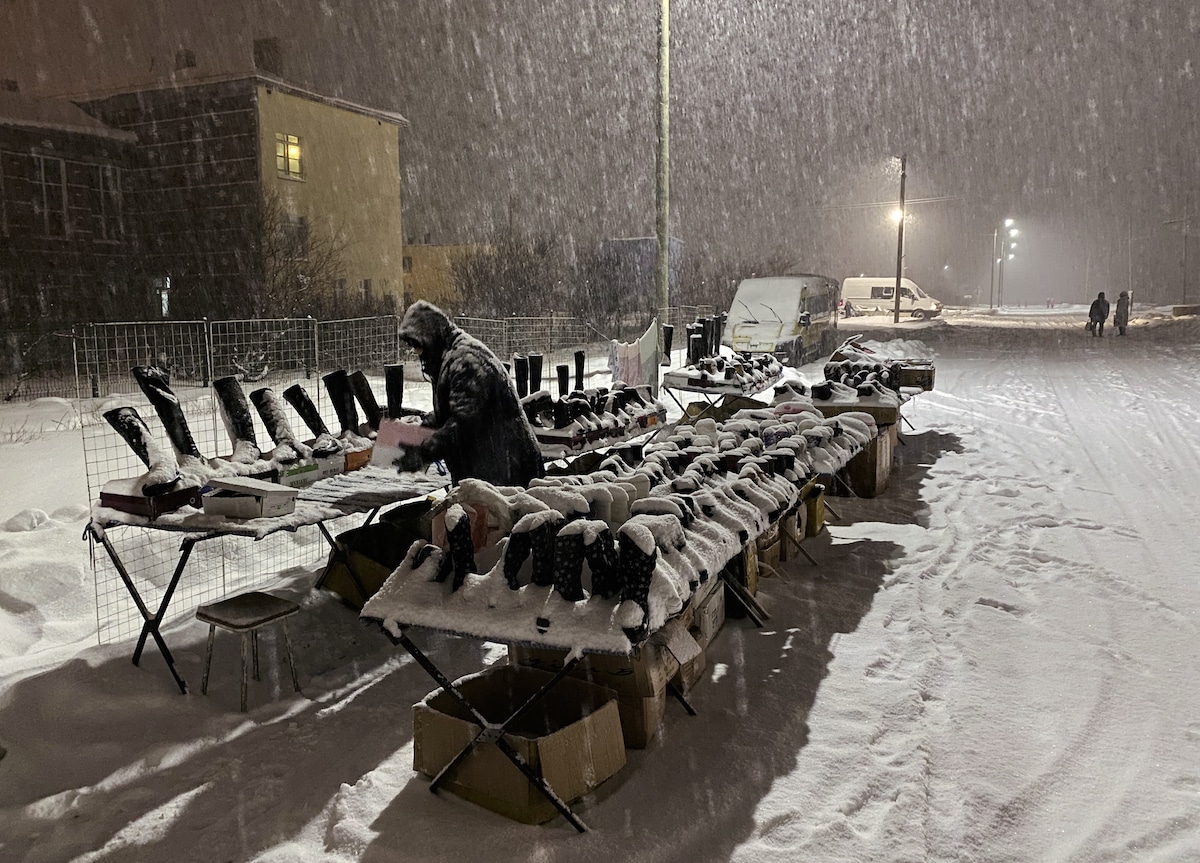 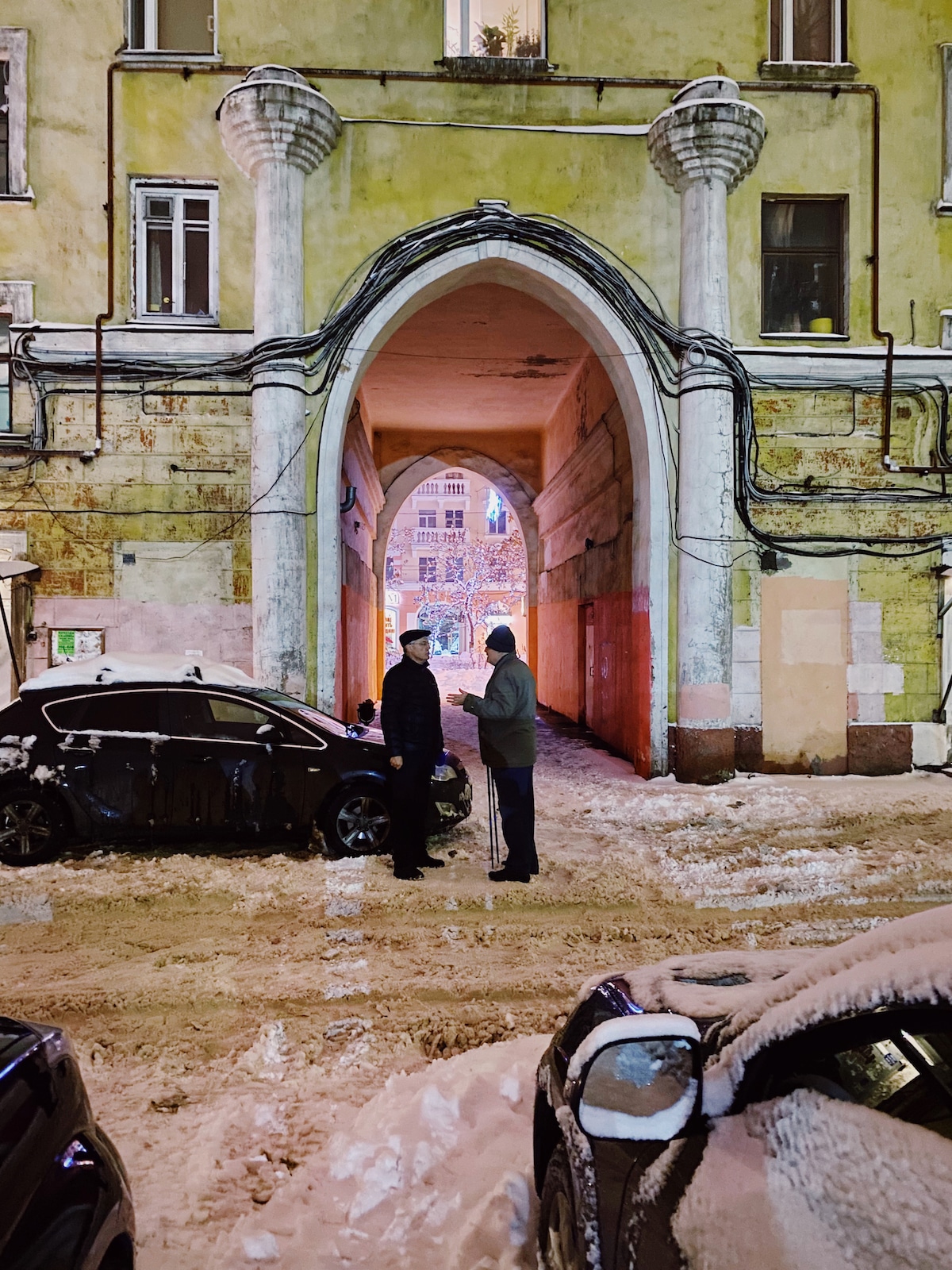 “Two men chat late at night in the courtyard of a Stalinist-era building. A taxi driver said that he slept ‘whenever he felt like it’ during the weeks of winter darkness.” (Photo: Amos Chapple/RFE/RL) 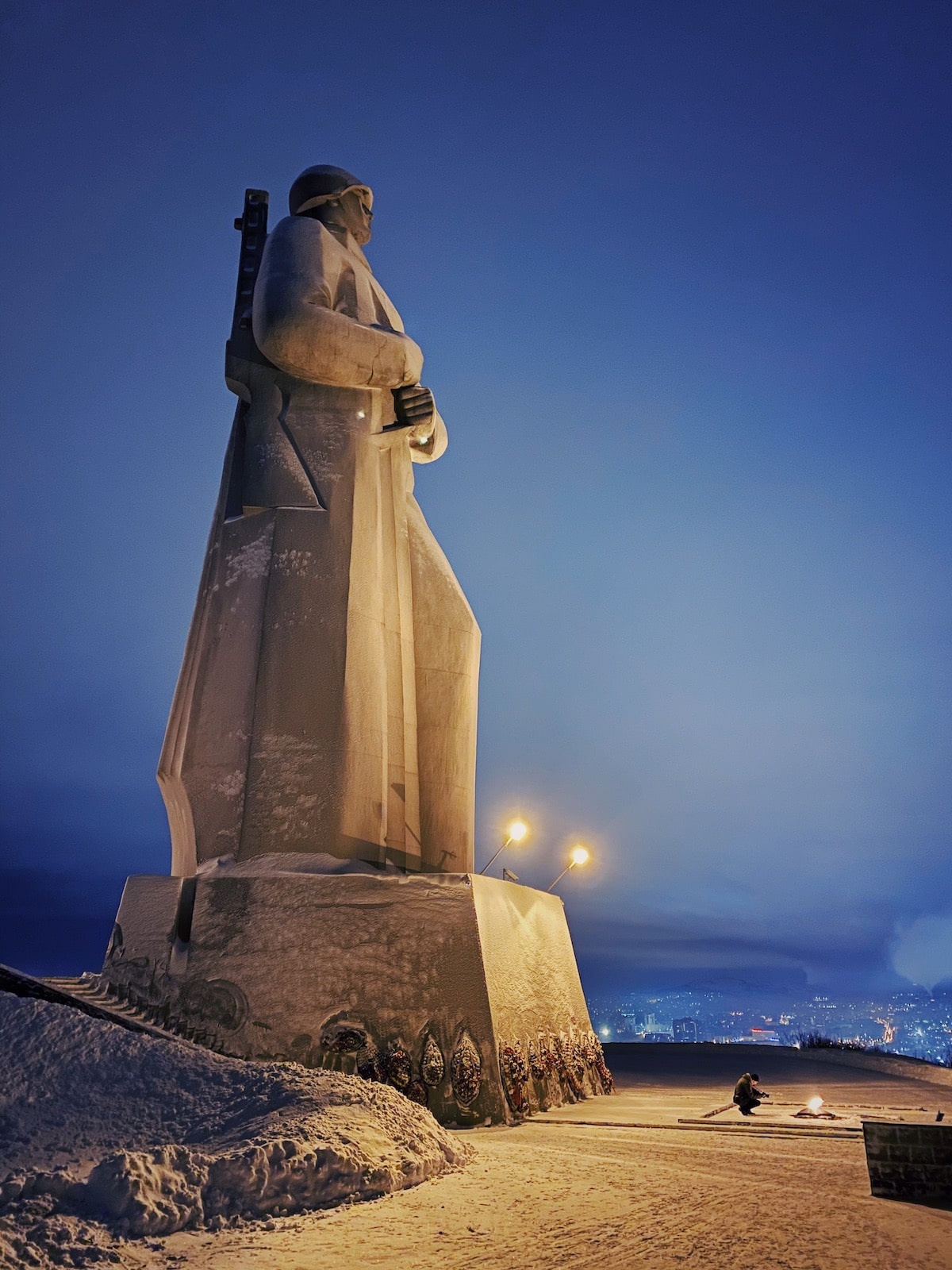 “The hilltop Alyosha Monument of Murmansk dedicated to the Soviet servicemen who defended the city through World War II.” (Photo: Amos Chapple/RFE/RL) 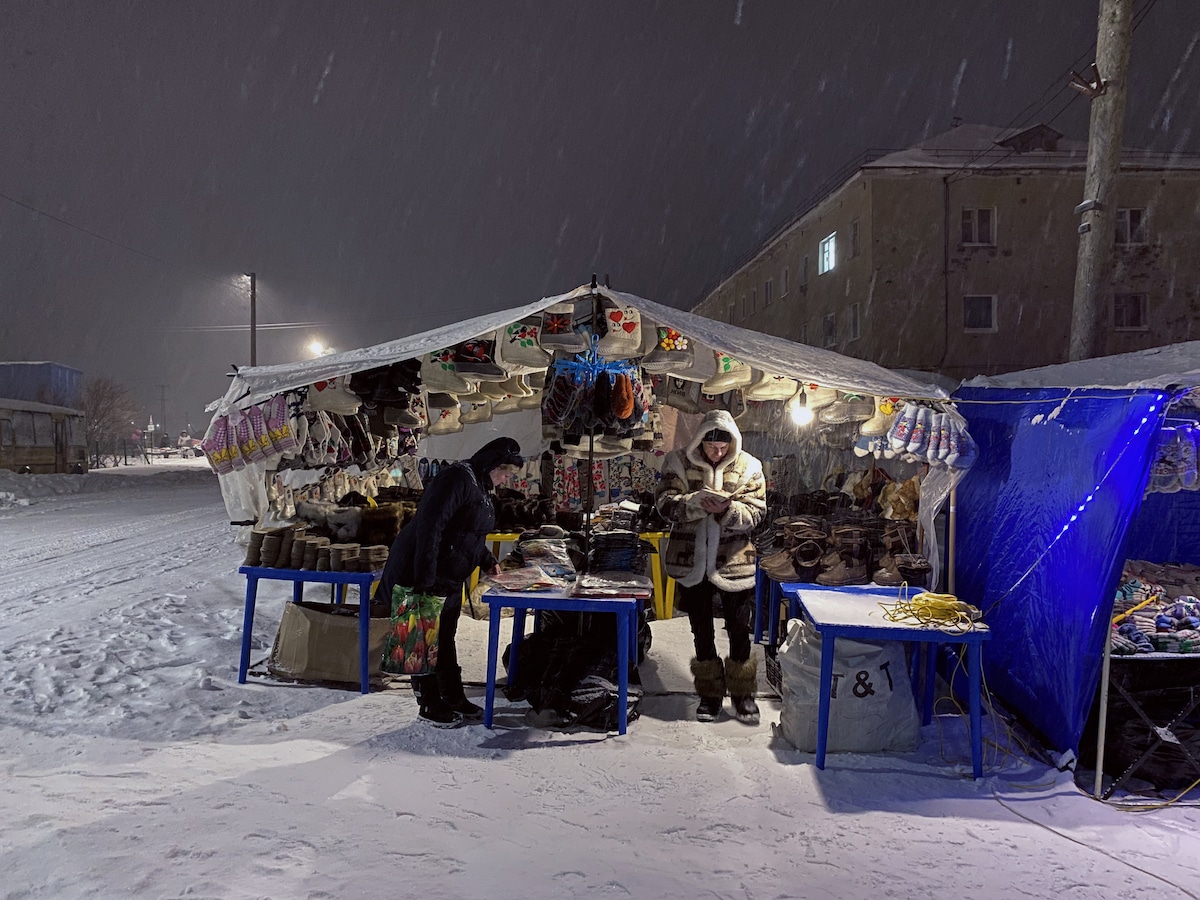 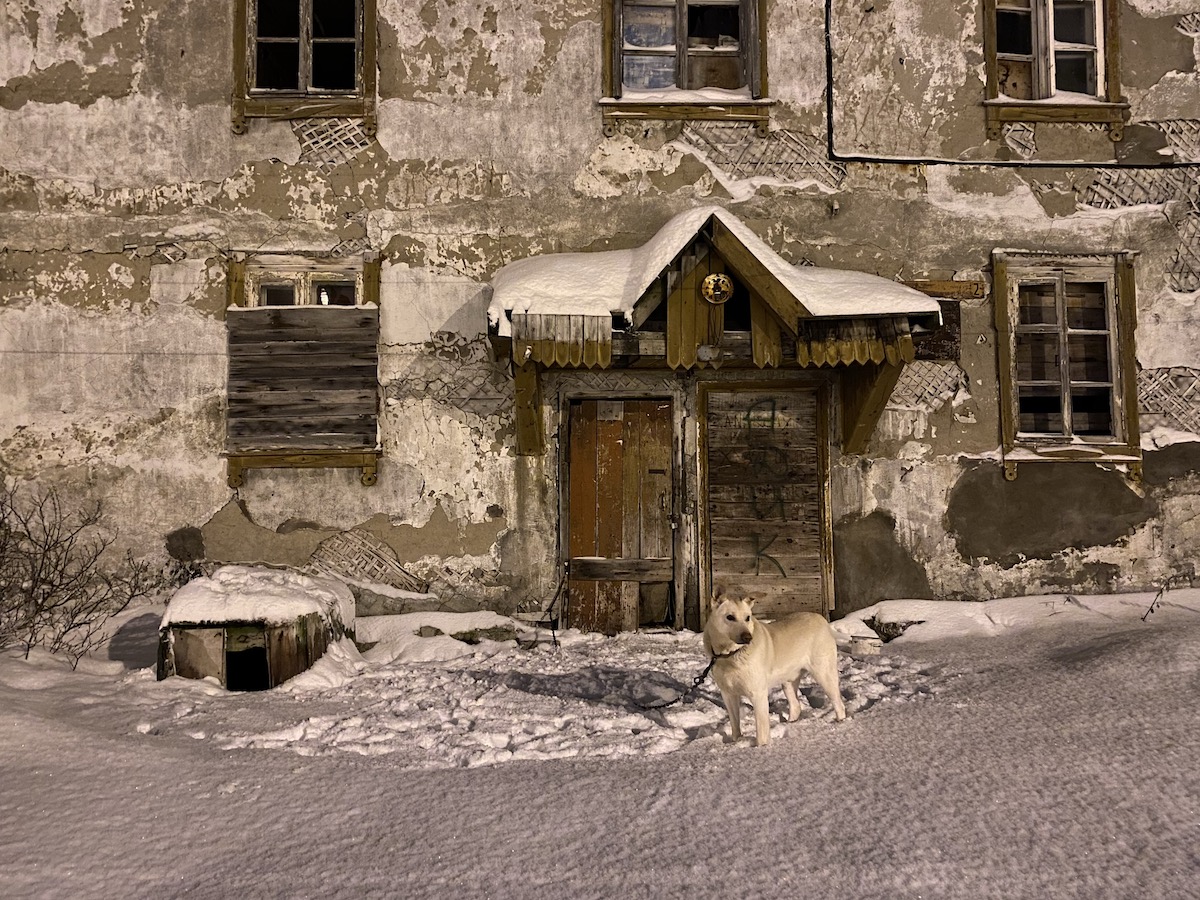